The adventure gene runs deep in Gus. His great-grandfather, Aubyn Trevor-Battye, was an explorer and naturalist in the Arctic and Africa. His grandparents were pioneering farmers in Western Kenya in the early twentieth century, a tradition continued by his parents, who farmed in both Kenya and Brazil (where they run a medicinal plant conservation and research programme in the Atlantic Rainforest to this day: www.iracambi.com). Gus himself was born in post-colonial Kenya, where the seeds of his lifelong obsession with Africa were first sown.

In 1985, as an 18 year old, fresh out of high school, he persuaded two schoolfriends to join him on a road trip through Africa in an ageing first generation Range Rover. Their adventures took 7 months and included crossing the Sahara, circumnavigating the little-visited Lake Chad, negotiating a chunk of the Congo rainforest, eventually finding their way through the fabled Mountains of the Moon and back to his homeland in the Great Rift Valley of Kenya. Along the way they encountered coups, civil wars and pygmy tribes, and survived a major car crash. Astonishingly, they made it unscathed. 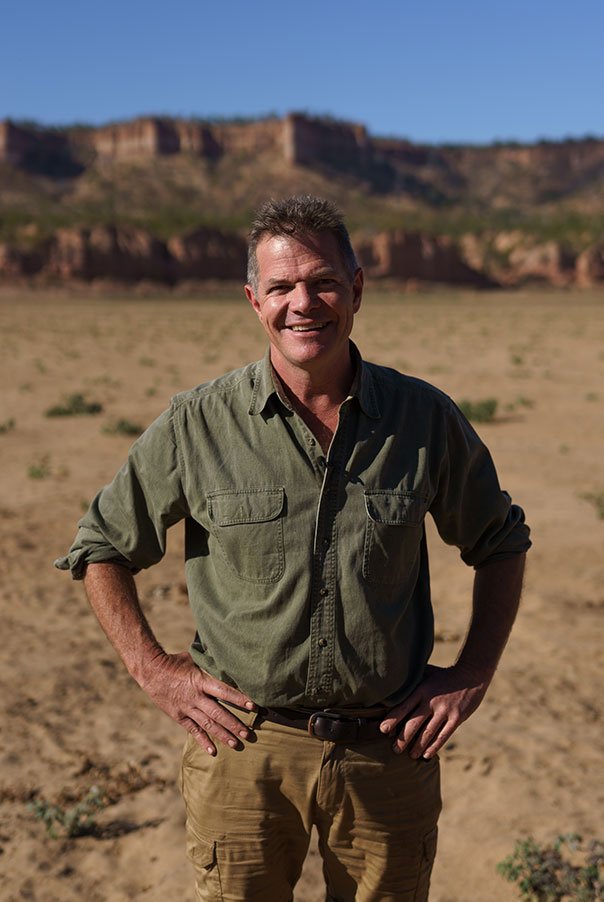 A few years later, after graduating with a degree in social anthropology, Gus led the Cambridge University Trans-Americas Expedition through the heart of the legendary Darien rainforest in Panama. Their timing couldn’t have been worse, as the US military invaded the country a week after they arrived. But they persevered, and after various encounters with bemused Kuna Indians, earnest American missionaries, Colombian drug-runners and US Special Force operatives, made it safely out of the rainforest and on down to the tip of Tierra del Fuego.

Upon his return from Latin America, Gus volunteered in a refugee camp in Zimbabwe for refugees from the civil war in neighbouring Mozambique. Quickly finding his metier as an environmentalist, he was involved in reforestation activities across five different refugee camps until the war ended in Mozambique. Immediately after that, he founded SAFIRE, an environmental NGO specialized in community management of woodland and forestry resources in Zimbabwe.

After another stint as a Masters student at the Yale School of Forestry (where he was lucky to study under the renowned American ethnobotanist Dr Michael Balick), Gus opted for a  more business-driven approach to the problems of biodiversity loss and deforestation. This led him to the idea that commercialising indigenous plants gives rural people tangible economic incentives to conserve and manage them sustainably. It also ignited his enduring passion for all things Baobab.

There followed a 20 year career developing and promoting African plant products for launch onto global markets, interspersed with bouts of biodiversity consulting for the United Nations and other international organisations. And then in 2018, inspired by the success of his first clumsy attempt at a home-produced video on baobabs, Gus launched his new career as a YouTube presenter. Discovering a natural aptitude in front of the camera, and an ability to explain complex biodiversity challenges in simple and easy to understand language, Gus has grown quickly to fill a unique niche in the world of documentary video.

A committed supporter of young talent, Gus actively looks to help others find and fulfil their life’s purpose. His annual music festival (Miombo Magic), held at his home in Zimbabwe, has launched many musical careers. He is also part-owner of a craft brewery and distillery in the talismanic town of Victoria Falls, where he can fully indulge his knowledge of quirky African plant flavours. Although often found travelling the world to share his messages on plant conservation, he is at his happiest camping in the bush, wearing his tatty shorts, carrying his botanical hand lens and cracking a cold one as the sun sets over another beautiful African day.

Throughout his life, Gus has pursued two hobbies with similar levels of intensity. Of these, music has been the most all-consuming. He began as an orchestral bass player, migrated into jazz and blues, and then took the predictable step into rock and punk. From making his own music (which he does to this day with ageing Zimbabwean rockers “the Skuds”), it was a natural progression into festivals, and Gus now hosts a key event on the local calendar at his home every year, the Miombo Magic music festival.

A second love since childhood has been aviation, and Gus is part-owner of both a small aircraft and a microlight, and still harbours a deep-rooted desire to fly his plane across the South Atlantic to Antarctica.

Links to other stuff